Actor, producer, and co-founder of Thursday Night Theater Club (TNTC), Tom Vitorino has appeared in film, television, commercials, soap operas, and live theater. Most recently, he starred in The Elephant Man, the tale of tragically deformed John Merrick, at the historic El Portal Theatre. Tom graciously took time from his busy schedule to interview in March 2020. 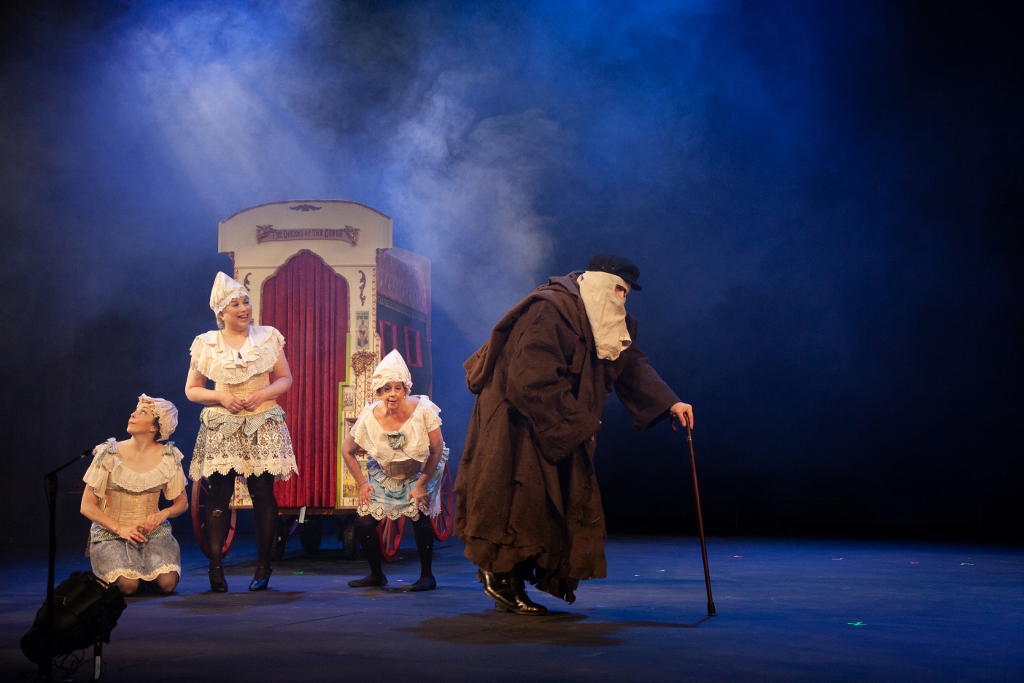 When did your theater company first begin? Were you involved from the beginning? Who/how/why/where was it founded?

TV:  Alice Walker and I started “Thursday Night Theater Club” at her kitchen table in 2017. While the company has no long career in the sense of decades, anyone who’s ever taken on the task of starting a theater company ages a decade in the first year!

Alice and I wanted to put on plays that held a mirror up to the audience. That was the reason we started the company. The plays we’ve produced deal with very real social issues, tend to be timeless, and have large casts. We wanted to involve large groups of people from all social groups. It is about activating the idea of change, some sort of mind and spirit expansion, even if for just those associated with the production.” Tom Vitorino and Alice L. Walker in "A View from the Bridge" - Photo by Cierra Danielle

Have you had to close down any productions due to COVID-19? Were you in the middle of a run - or do you have any upcoming productions - which are affected?

TV:  I was at the pre-production stage of Anne Nelson’s The Guys. This was my new endeavor outside of TNTC. This play takes place during the period right after 9/11. It really amplifies the idea of how complete strangers can lean on each other in the most difficult of times. We’ve had a few get-togethers and were set to meet on March 15, but we’ve postponed all of our meetings. We were just about at that point to really dive in, so that is on hold. Ronnie Marmo is directing. Robyn Cohen is playing the role of Joan, and I will be Nick. This will open at Theater 68 in the NoHo Arts District on September 11, 2020. Yes, I am projecting that we return to a sense of normalcy. I have to. Over the past weeks, has COVID-19 impacted on your group in any way?

TV: I think right in front of me is the fear, the anxiety, and the depression that I have never really experienced like this. Usually those feelings are in the moment; but, with this deadly outbreak, you go to bed with it. You awake, and those feelings are still there. Every cough creates a sense of panic!  New terms like “social distancing” are forever a part of the world; and that distance - while 110% needed - creates the inability to physically comfort a friend, a stranger, or anyone outside of your “home stay” crew. I spend a lot of time on Zoom, and it is rather ironic that the very medium of online connectivity that many felt was not a real connection is now in many cases the only connection we have left at this point. My wife Stephanie and I have stayed at home since March 11 except for a few trips to the grocery store wearing whatever PPE (there’s another new term) we have. We are three weeks into this situation. If I should meet eyes with another shopper while grocery shopping, there’s this knowing nod, this unspoken support of each other. The “social distancing” that we all employ is a shared experience is a sign of solidarity against this virus and an act of love for life itself.  So all of this makes me even more grateful for many things I have taken for granted. Ethan Micael, Tom Vitorino, and Jeremy Falla in "A View from the Bridge" - Photo by Cierra Danielle

Are you doing anything right now to keep your live theater going? Having virtual meetings? Streaming?

TV:  We have discussed when the time is right to start some readings on Zoom. At this time, I just think that people need space to figure out the day-to-day life changes that this virus has created. There is a lot of information to process, and that reality is front and center every day. But, in the near future, we will find a way forward.

TV:  In hard times like World War I, The Great Depression, World War II, and 9/11, people needed entertainment to forget - if just for a few minutes or a few hours - about the reality just outside the living room, cinema, or theater door. Some look at “the arts” as being non-essential in these difficult times; but to me, that is like saying love is non-essential. Art will always be essential to the healing of the world and the existence of a loving, caring humankind. Los Angeles is an amazing, resilient town, and we will come out of this stronger than we went in. As for theater goers, the theater needs them as much, if not more, than it needs the performers. We are all counting on them, as we always do; and they have never let us down.

I understand that you are offering something special to theater patrons for your upcoming productions. Will you tell us more about that?

TV:  We had always planned on offering free tickets to firefighters for our upcoming production of The Guys,, since it deals with the subject matter of eulogizing eight firefighters who lost their lives in 9/11. It just felt like the right thing to do. The COVID-19 outbreak has shifted our social awareness, and we have a responsibility as artists to our community. Any student, healthcare worker, first responder, and anyone 65 years or older, is added to our comp list. We will have to figure out how we administer that. Maybe half the house will be reserved for those groups. Everyone else will be “pay what you can afford,” but that will be our policy.

Do you have any closing thoughts or words of encouragement for your patrons?

TV:  You are not alone in your thoughts. We all share those same fears. But know that this will eventually end, and hopefully we come out a little better than we were before this happened. I wish I could line all of you up and give each of you a hug, but that might not happen again for a good while. So, wrap your arms around yourself and give a little squeeze. That hug’s from me.