A masterpiece of modern storytelling meets the magic of majestic theatre. I was lucky enough to have been alerted by a friend to catch the closing performance of LADIES. Had I seen an earlier performance I would have sent my sister a round trip ticket from Chicago so she could witness this incredible show. That’s how good it was. I was shocked when I went on Better-Lemons and read what the “critics” had to say.

Shocking. 60% sweet by critics?! What?! What show did they see? Crazy. That was an incredible piece of theatre. So well written, wonderfully directed, beautifully staged, so moving, thought provoking, relatable. Half the women coming out of the theatre were sobbing. You could feel the energy, the buzz... I overheard comments praising the experience... what is wrong with that picture, who are those critics?

Wow. Well, art is certainly subjective, and theatre is not everyone’s cup of tea, but I know I am not alone in wanting to heap praise on this performance. Clearly, I am the only audience member who knows that as an audience member, we can voice our opinions on Better-Lemons as well. Because after a run of a month, mine is the first audience review. But I caught eyes with so many women as we exited the theatre, and gave each other that nod of relief, of recognition, of knowing that we had just experienced a deep truth. A telling of a tale that has been stifled, suppressed, hushed, and ultimately silenced through the years, I am appalled that the powers-(and critics)that-be are still trying to find ways to invalidate it! For every reason they gave as a critique, I thought it even more worthy of praise.
This show is a must-see. A wonderfully fresh, honest, creative, yes, extremely creative, and inspiring piece of theatre that entertains as much as it stirs up feelings... all of them! That, in my humble opinion, is great theatre.
If there was a Super Sweet score, I would have chosen that. 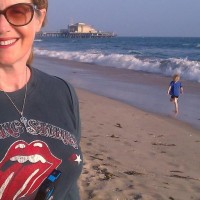 Lisa Verlo is a writer, performer, and lyricist whose songs have been featured on film and television. After studying at the Lee Strasberg Theatre Institute in Los Angeles, and with Sandra Seacat at her workshops around the world, Lisa took to the road in a vintage VW bus, developing her writing through performance art and participating in the poetry slam circuit.
Returning to LA to record albums of spoken word and song, Lisa teamed up with composer and musician Frank Simes collaborating on music, multimedia, and musical theatre. Verlo and Simes staged their original musical The Door at the Sierra Madre Playhouse in 2012. Lisa performed her one woman show Sex Rated G at the Edinburgh Fringe Festival in 2015 and the Hollywood Fringe Festival in 2018.

Lisa’s second solo show, HOLLYWOODN’T, delves into sexual harassment within the entertainment industry and pays homage to the bravery and empowerment of the #MeToo movement. Directed by and developed with Jessica Lynn Johnson, HOLLYWOODN’T was featured at SOLOFEST 2019, the largest solo theatre festival on the West Coast. HOLLYWOODN’T was also presented at the Hollywood Fringe Festival 2019, where it won a Producer’s Encore Award and received a nomination for the Larry Cornwall Award for Musical Excellence.
HOLLYWOODN’T was a featured show of the Binge Fringe Festival of Free Theatre at the Santa Monica Playhouse, Nov 3, 2019, as well as Soaring Solo and the Lounge Theatre's SOLO STARS SERIES Jan 26, 2020. Lisa will also be performing HOLLYWOODN'T at SOLOFEST March 15, 2020.