I liked how personable Cathy is. From the moment she turns that light when she has to “squeeze the cans” as she’s being interrogated by Scientology and reveals private information about her life, information that they will use against her later on to break her down and shift her beliefs to the point where she ends up spending close to a million dollars in stepping up the ladder within the organization as well as slowly losing her mind.
Most heartbreaking part of the show comes up when they tell her that losing her father is not a big deal for he’s just “a body” and shake her grief off as she’s been trained to dumb her feelings.

Nothing. She really kept my attention throughout the entire show. Maybe more Tom Cruise jokes? Nah, I think she bashed him just enough besides why feed his ego any damn more? This isn’t about T. C. it’s about Cathy’s survival and she accomplished that.

Cathy Schenkelberg is phenomenally entertaining, real, comical and, without missing a beat, serious when the script calls for it. An incredible story about surviving the Scientology’s cult that will leave you paranoid and shaking your head in disbelief. 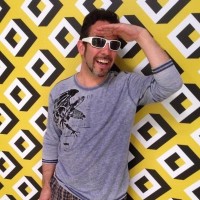 Hi, everybody! Sweet, sweet, sweet!! I’m Victor Sotomayor and glad to be part of the Hollywood Fringe Festival community. Host of Italo’s Blog Talk Radio where I interview actors, directors about their theater productions. I also wrote, produced and directed The Oz Monologues for 2018 which received Sweet Ratings on the LemonMeter and currently working alongside Irina Kompa in her brand new Potato Nose production of The Journey of The Little Prince which I’m sure audiences will enjoy and find very sweet and inspiring as well. Thank you for supporting local theater and local artists. Have a super sweet time at the Hollywood Fringe!
ADS