This show is unlike anything you will ever experience. All I have to say is that you should go check it out and just sit along for the odd, perplexing, and heartfelt ride.

Right, so this show should be experienced as blindly as possible, so I'm going to speak in the most annoyingly vague way known to mankind.

Know that there is audience participation. Also know that you're in good hands with Sam.

I think this is what art is?

Various things happen in the background while Sam performs - whether it's equipment being moved around, an audience member doing something on stage, or some sort of special effect. It's all very postmodern with Sam being willing to call attention to the artificial nature of the performance and remarking on his own abilities when he doesn't land a chord just right.

The songs are solid too - gentle, warm, folksy, often with the theme of loneliness.

I don't think you'll see anything else quite like this. The ending alone is worth the price of entry.

And that's just the chance you're going to have to take, my friend. 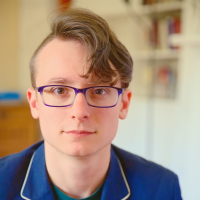